Free local music series to feature local, regional, national and international talent over the course of 5 shows this July

{Cortland, New York} – The CFCU Cortland Main Street Music Series continues to grow with its 2022 line-up featuring the best in local talent and world-class bands. A total of 15 artists will grace the CFCU Community Credit Union stage over the course of five free concerts, all taking place at Rose Hall, at 19 Church Street Cortland. The series celebrates nineteen years of bringing local, regional and national acts to Downtown Cortland with genres ranging from rock, americana, folk, country, blues and many points in between. Doors open at 5pm for all shows and music begins at 6pm every Friday in July.

The series kicks off with a triple billing on Friday, July 1st with headliners James Barker Band and supporting acts Taylor Made and Jon Rogalia. James Barker Band have fueled an incredible story over the last six years, largely on their own, from playing opening spots in small Ontario bars to charting multiple No. 1 singles, garnering hundreds of millions of global streams, and headlining some of Canada’s largest country music festivals. Now, with new music on the way, the four-piece is continuing their meteoric ascent in Nashville. In 2017, they sent their single “Chills” straight to the top of Billboard’s Canadian Hot 100 chart. The upbeat anthem also achieved Platinum status, alongside other songs from their introductory LP Game On, earning them numerous national awards. In addition, these best-friends have already amassed another six GOLD-certified and PLATINUM-certified tracks.

The second week of the series follows on July 8th with local roots rock band The Unknown Woodsmen and fellow area artists The Rollin’ Rust and Austin MacRae. Music fans across the Northeast are talking about CNY-based band The Unknown Woodsmen, who draw from the classic sounds of rock to create their own blues-reggae flavor of infectious rock grooves. Since its inception in 2011, the band has spent countless hours honing their signature sound and tirelessly performing throughout the Northeast. Whether it is their crafty hooks, old-school grooves, or energetic stage presence, The Unknown Woodsmen captivate crowd after crowd at show after show to a growing base of loyal fans in the Central New York region.

The series turns things up a notch in the third week, when The Rods headline the Friday, July 15th show at Rose Hall. They’ll be joined by supporting acts Sydney Irving and the Mojo and local singer songwriter Quona Hudson. The Rods are a series favorite and classic heavy metal band that rocked their way through the 80’s with a powerful, raw energy that led them on tours with some of today’s greatest metal bands—Judas Priest, Ozzy, Motorhead, and Metallica, to name just a few. Listeners will find that The Rods are still a force to be reckoned with today, as they continue on at full-throttle, with a new line-up and a forceful, vintage sound.

Friday, July 22nd, the CFCU Cortland Main Street Music Series will drench Rose Hall in the blues, when Joe Louis Walker brings his band to the Cortland stage, with opening sets by regional favorites Mike Powell and Raedwald Howland-Bolton. Joe Louis Walker, a Blues Hall of Fame inductee and four-time Blues Music Award winner celebrates a career that exceeds a half a century. A true powerhouse guitar virtuoso, unique singer and prolific songwriter, he has toured extensively throughout his career, performed at the world’s most renowned music festivals, and earned a legion of dedicated fans. Walker’s 1986 debut album Cold Is the Night on HighTone announced his arrival in stunning fashion, and his subsequent output has only served to further establish Walker as one of the leading bluesmen on the scene. NPR Music has called Walker “a legendary boundary-pushing icon of modern blues,” and he is already being referred to within the blues world as a living legend.

Rounding out the last show of the series on Friday, July 29th, Rose Hall will welcome headlining act Upstate along with opening artists Miss Tess Duo and Cloey Tierno. “With a warm soul-tinged folk core, strong pop sensibilities, and a taste for gorgeous harmony, Upstate are all too easy to fall in love with. Blending folk, R&B, gospel, rock, and jazz influences into an alluring but often hard-to-categorize sonic identity, the band has garnered respectable comparisons to early Lake Street Dive and Phox – acts who, like Upstate, broke genre molds without missing a bear (literally).” — Atwood Magazine

The City of Cortland, home of the Main Street Music Series, is centrally located in the scenic seven valleys of Central New York. Historically known as the Crown City, for its position as the highest elevation city in the state, Cortland is a gateway to the Finger Lakes Region and destination spot for live music and cultural events. The CFCU Cortland Main Street Music Series, presented by CFCU Community Credit Union, is a non-profit 501(c)3 organization with a mission to enrich Cortland’s culture and contribute to a vital downtown by providing an annual series of concerts by local, regional and national artists. Additional support is provided by www.CrownCityRising.com through the Business Development Corporation and Cortland Visitors Bureau. More information can be found by following the series on Facebook and Instagram or by visiting their website at www.MainStreetMusicSeries.com. 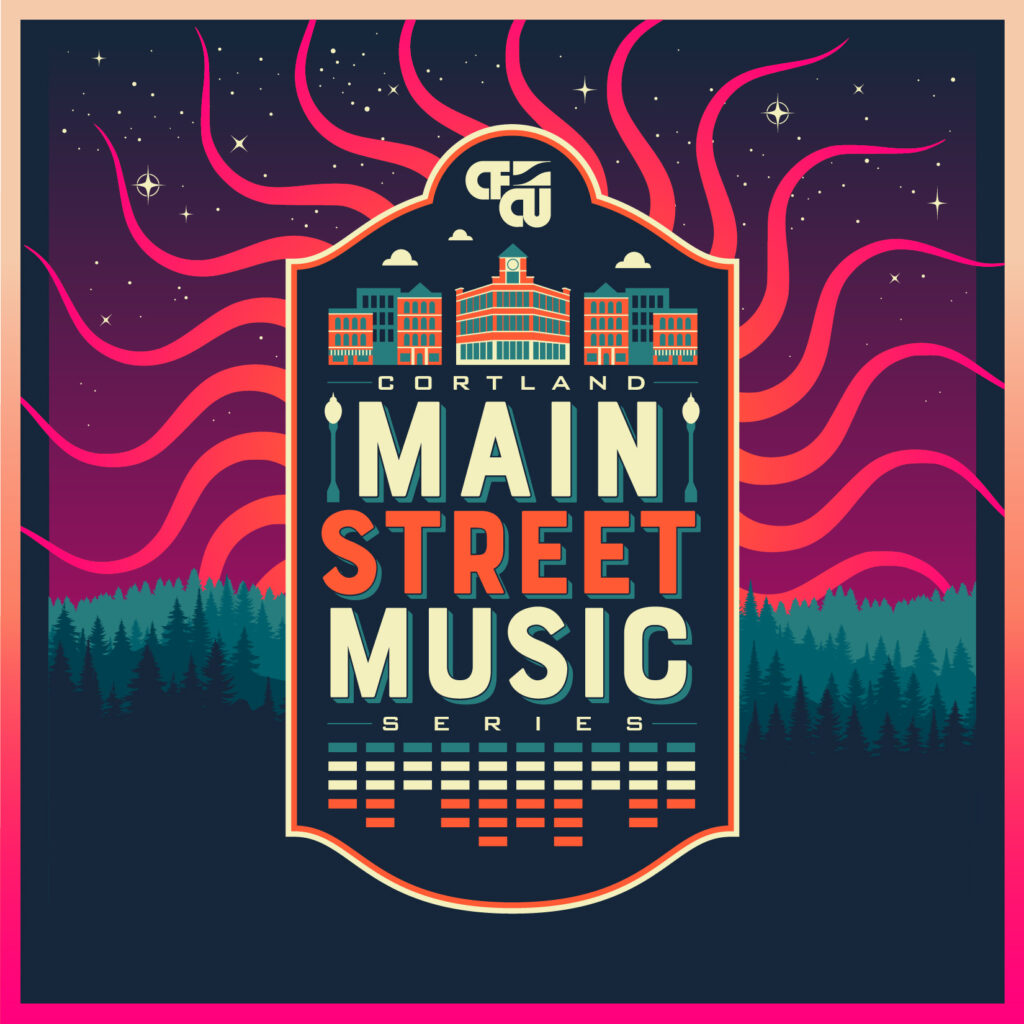